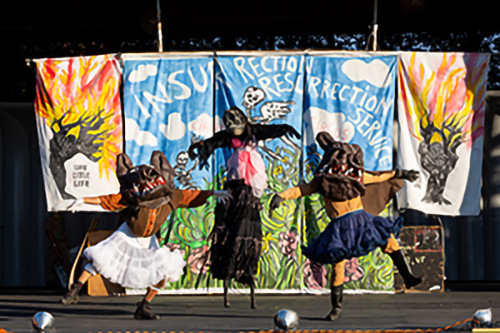 On October 28, Bread & Puppet Theater will come to Appalachian State with a brand new performance in the tradition of the iconic Bread & Puppet Circuses that began at Goddard College in Plainfield, Vermont in 1970. Traditional circus tropes are recast, with the help of Bread and Puppet's distinctive folk iconography, to draw attention to the urgent issues of the day. Stilt dancers, paper maché beasts of all sizes and Bread & Puppet's Fight-Against-The-End-Of-The-World Brass Band contribute their riotous inspiration to this colorful spectacle of protest and celebration. "We celebrate the 50th anniversary of Our Domestic Resurrection Circus”, says director and co-founder Peter Schumann. "The show," says Schuman, is “in response to our totally unresurrected capitalist situation, not only the hundreds of thousands of unnecessarily sacrificed pandemic victims but our culture’s unwillingness to recognize Mother Earth’s revolt against our civilization. Since we earthlings do not live up to our earthling obligations, we need resurrection circuses to yell against our own stupidity."Prior to the performance, Bread & Puppet Theater offers an October 27 cantastoria workshop to students and community members, who will also be performing in Our Domestic Resurrection Circus alongside the visiting Vermont puppeteers on October 28.  Due to the inclimate weather, the Oct. 27 workshop will take place at the Schaefer Center (main stage), 733 Rivers St., from 10:00 am-12:00 pm and 7:30-9:30 pm. The circus performance -- free and open to the public -- will begin at 7:00 pm on October 28 in I.G. Greer Auditorium, 401 Academy St. ASU campus.

Organized by Appalachian State University's Center for Judaic, Holocaust, and Peace Studies, the visit is co-sponsored by ASU's Hayes School of Music, Reich College of Education, Schaefer Center for the Performing Arts, A.P.P.S. Films Council, and the Departments of Art, English, Interdisciplinary Studies (IDS), Sustainable Development, and Theater and Dance.

After the show Bread & Puppet will serve its famous sourdough rye bread with aioli, and Bread & Puppet’s “Cheap Art” – books, posters, postcards, pamphlets and banners from the Bread & Puppet Press – will be for sale. 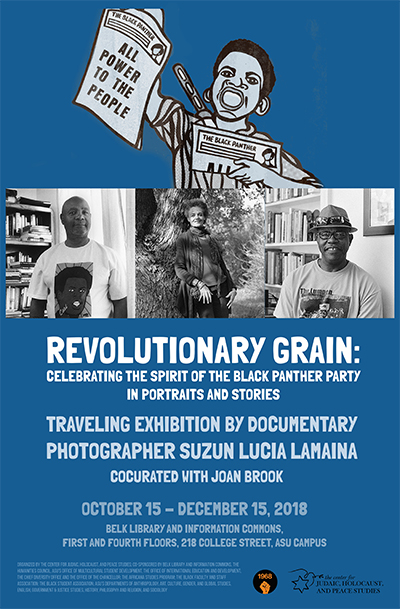 This fall, Belk Library and Information Commons is host to the traveling exhibit “Revolutionary Grain: Celebrating the Spirit of the Black Panther Party in Portraits and Stories” by California-based artist Suzun Lucia Lamaina. The Center for Judaic, Holocaust and Peace Studies, the program's organizer, invites the public to view and discuss the exhibit that starts on the library’s first floor and concludes on the fourth floor. It opens on the evening of Monday, October 15, and will be on display until Saturday, December 15.

The exhibition commemorates the legacy of the Black Panther movement through powerful portraits and narratives assembled by Lamaina in the form of a social documentary photographic essay. The artist traveled across the country for five years to speak to and photograph more than fifty former Black Panther Party members. The work is designed, Lamaina stresses, to start conversations about the party and the Black Freedom Struggle, which is far from over.

The Black Panther Party, founded by Bobby Seale and the late Huey P. Newton in October 1966 in Oakland, California, initially focused on police violence in black communities. By the times of the worldwide revolts of 1968, the Party had emerged as a national and global media icon. Thrust into a vanguard role with close to fifty chapters throughout the United States and an International Section in Algiers, North Africa, it helped to build interracial alliances on a global scale. Almost from its inception, the Black Panther Party engendered massive controversy. The Nixon administration dubbed the Panthers the “ greatest danger to the internal security” of the United States. Many have spoken for and often falsified the record of the party’s activism. This exhibition gives a wide range of former members the opportunity to offer accounts of their own, which also powerfully speak to today’s political struggles. The events and exhibit are open and free to the public. No tickets are required. 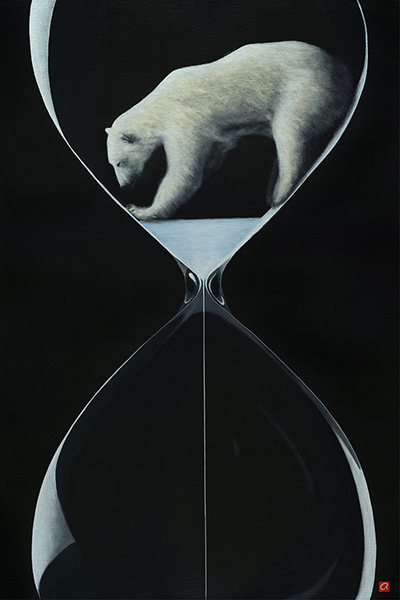 Reception and Exhibition by German and American Artists at HOW Space (Oct. 5)

The Center invites the public to a reception at the TEASE exhibition with German and American artists, including Christian Ristau, Isaac Payne, and Terry Thirion, at HOW Space (182 Howard Street, Boone). The reception will take place from 6:00 until 8:00 pm on Friday, Oct. 5 (as part of First Friday Art Crawl). The Center is partnering with the Transatlantic Exhibition of Art in the Southeast (TEASE) and the North Carolina Zeitgeist Foundation in bringing the event to ASU and Boone. This year's theme, Wunderbar Together, directly reflects the Center's commitment and work in Peace Studies. 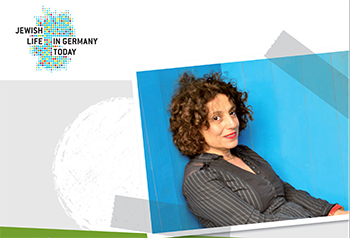 From September 12 until October 3, ASU’s Center for Judaic, Holocaust and Peace Studies (CJHPS) hosts the traveling exhibition "Jewish Life in Germany Today." The exhibit will be on display on the first floor of Plemmons Student Union on the ASU campus (263 Locust Street, Boone, NC). The exhibit is open to the public during regular hours (Mon.-Fri., 7am-11pm; Sat., 9am-11pm; Sun. 12pm-11pm).

Some 100,000 Jews are currently registered within religious communities organized under the umbrella of the Central Committee of Jews in Germany. Berlin, the German capital, is home to the largest community of 10,000 members. In 1999, the Abraham Geiger College, the first liberal rabbinical seminary in Continental Europe since the Shoah, opened its door in response to the growing need for academic rabbinical and cantorial training. Compared to the 525,000 Jews who lived in Germany before the Holocaust, the numbers are still small, but the country is home to one of the fastest-growing Jewish communities in the world. At the same time, Germany is again the site of growing anti-Semitism that far exceeds the ranks of the Alternative for Germany. Also beyond the Central Committee of Jews in Germany, there are rapidly growing demands to establish the office of a special envoy on anti-Semitism based at the Federal Chancellery.

The exhibit – put together in Berlin on behest of the German Embassy in Washington, D.C. – brings together a cacophony of voices from Jews in the Berlin Republic, ranging from Michael Blumenthal, the Founding Director of the Jewish Museum in Berlin, to Adriana Altaras, an actor and stage director, who was involved in interviewing survivors for the Shoah Foundation. On panels and in audio-visual displays, it explores how Jews, living in a country whose political leadership once planned and perpetrated an unprecedented genocide against the Jewish people, confront and live with past and present challenges and how many of them remain committed to succeed against all odds.