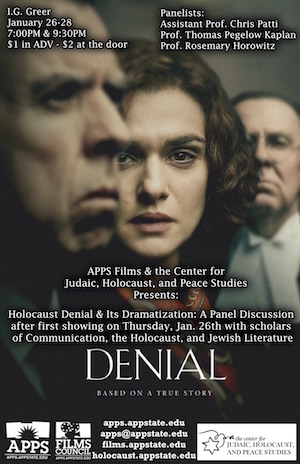 The Appalachian Popular Programming Society is partnering with ASU's Center for Judaic, Holocaust, and Peace Studies in screening M. Jackson's Denial (2016) on the ASU campus. The first screening on Thursday, Jan. 26, will be followed by a panel of Holocaust and Jewish Studies scholars that discuss the film. Panelists include Assistant Professor Chris Patti, a Communications scholar who has worked on Holocaust survivor storytelling, Professor Rosemary Horowitz, a specialist in Holocaust literature, and Prof. Thomas Pegelow Kaplan, a Holocaust scholar and the Director of the Center for Judaic, Holocaust and Peace Studies.

The first screening will begin on
Thursday, January 26, at 7:00 pm
in I.G. Greer Auditorium located at 401 Academy Street on the ASU campus.
The panel will start at 8:45 pm.

The screenings are open to the public. Ticket prices are $2 at the door (cash only). There are more screenings of the film at the same location (without a panel discussion) on Jan. 27 and 28 at 7:00 and 9:30 pm. See also http://csil.orgsync.com/org/apps/Films/. 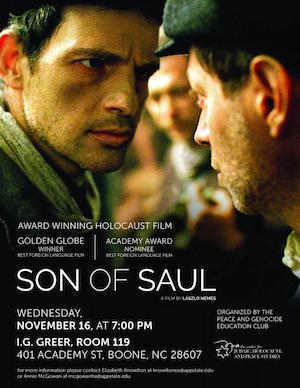 The Peace and Genocide Education Club, the student group that supports the work of the Center for Judaic, Holocaust, and Peace Studies, invites the public to a screening of the Academy-Award winning 2015 film "Son of Saul." The Hungarian film powerfully captures the struggles of Saul Auslaender, a member of one of the Jewish Sonderkommandos, at Auschwitz. The screening takes place on Wednesday, November 16, at 7:00 pm at I.G. Greer Hall, Room 119, at 401 Academy Street on the ASU campus. The event is free of charge and no tickets are required. 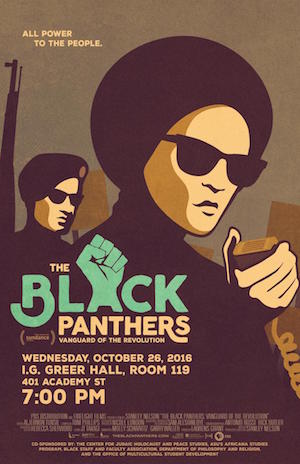 Screening of Acclaimed Documentary on the Black Panther Party

ASU's Department of Philosophy and Religion along with the Center for Judaic, Holocaust and Peace Studies invite the public to a screening of Stanley Nelson's 2015 documentary "The Black Panthers: Vanguard of the Revolution."

The screening will take place in I.G. Greer Hall, Room 119, on the ASU campus on Wednesday, October 26, at 7:00 pm. The event is free of charge and no tickets are required.

From the time of its establishment in October 1966, the Black Panther Party led by Huey P. Newton and Bobby Seale, two former Merritt College students, focused on police violence against the black population in the United States. In light of the ongoing killings of black men and women at the hands of the police and their coverage in the mainstream media today, it is striking how many of the party's arguments and positions are still relevant for our discussions and analysis. At the same time, the Black Panther Party is also an example of how some leftist black activists and organizations engaged in practices of anti-Zionism, while siding, for example, with Chairman Y. Arafat's PLO. October 2016 also marks the 50th anniversary of the Black Panther Party's establishment. It is, thus, time for a much-needed reassessment of a political movement and its practices that have often been systematically distorted and attacked.

"The Black Panthers: Vanguard of the Revolution" is the first feature-length documentary to explore the Black Panther Party, its significance to the broader American culture, its cultural and political awakening for black people, and the painful lessons wrought when a movement derails. Renowned documentarian Stanley Nelson, Jr., goes straight to the source, combining rare archival footage with the voices of key people who participated or fought the Party, ranging from leading Panthers like Kathleen Cleaver and Ericka Huggins to police officers, FBI informants, journalists as well as white supporters and detractors.

The much-acclaimed film was produced by Independent Lens and Firelight and co-funded by PBS and the Corporation for Public Broadcasting. It premiered at Sundance Film Festival in 2015.

For more information, please contact Prof. Rick Elmore at elmorerl@appstate.edu or the Center for Judaic, Holocaust and Peace Studies at holocaust@appstate.edu or 828.262.2311. 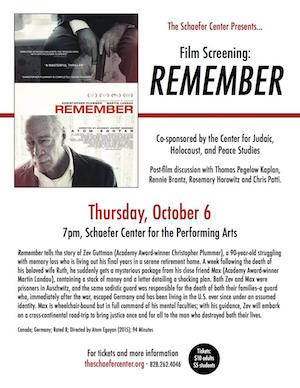 The Center for Judaic, Holocaust and Peace Studies is partnering with ASU's Office of Arts & Cultural Programs in screening the Atom Egoyan's new feature film Remember not the ASU campus. The screening will be followed by a panel of Holocaust and Jewish Studies scholars that discusses the film.

Remember tells the story of Zev Guttman (Academy award-winner Christopher Plummer), a 90-year-old struggling with memory loss who is living out his final years in a serene retirement home. A week following the death of his beloved wife Ruth, he suddenly gets a mysterious package from his close friend Max (Academy award-winner Martin Landau), containing a stack of money and a letter detailing a shocking plan. Both Zev and Max were at Auschwitz, and the same sadistic guard was responsible for the death of both their families–a guard who, immediately after the war, escaped Germany and has been living in the U.S. ever since under an assumed identity. Max is wheelchair-bound but in full command of his mental faculties; with his guidance, Zev will embark on a cross-continental road-trip to bring justice once and for all to the man who destroyed both their lives.

Academy Award-nominated director Atom Egoyan creates a thrillingly fast-paced revenge story that, in a highly original and deeply intimate way, deals with the aftermath of one of the most deplorable and significant events in recent history. With an incredible lead performance from Christopher Plummer as the frail but unstoppable Zev, Remember manages to keep audiences on the edge of their seats while giving them something to think about long after the film is over.

Prof. Rosemary Horowitz, a specialist in Jewish literature and literacy, Prof. emeritus Rennie Brantz, a German historian and Holocaust scholar, and Assistant Professor Chris Patti, a Communications scholar who has worked on Holocaust survivor storytelling will discuss the film as part of the post-screening panel. Prof. Thomas Pegelow Kaplan, a Holocaust scholar and the Director of the Center for Judaic, Holocaust and Peace Studies, will moderate the discussion.

"Christopher Plummer puts on a master class in acting and his director, Atom Egoyan, delivers one in audience manipulation in a psychological thriller featuring the most blood-boiling of plot devices." – The New York Times 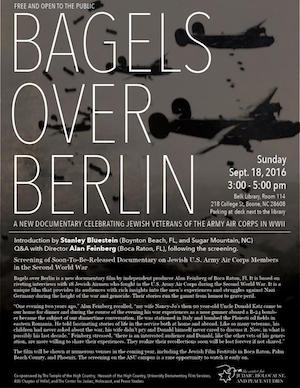 Bagels over Berlin is a new documentary film by independent producer Alan Feinberg of Boca Raton, Fl. It is based on riveting interviews with 18 Jewish Airmen who fought in the U.S. Army Air Corps during the Second World War. It is a unique film that provides its audiences with rich insights into the men's experiences and struggles against Nazi Germany during the height of the war and genocide. Their stories run the gamut from humor to grave peril.