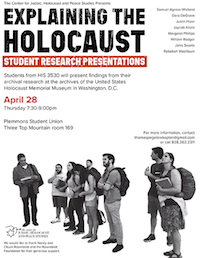 Organized by the Center for Judaic, Holocaust and Peace Studies (CJHPS), ASU students in History 3530 carried out primary source research at the National Archives in College Park, MD, and the Archives of the United States Holocaust Memorial Museum in Washington, DC, over spring break. Come and join us for a presentations on the findings of their research, ranging from issues of Jewish resistance against the Nazi state to the role of Muslim Albanians and their efforts to rescue European Jews during the Holocaust. The session will begin at PSU's Three Top Mountain Room 169 on Thursday, April 28, at 7:30 pm. 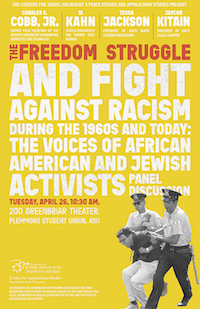 White American-Jewish activists made key contribution to the civil rights movement of the 1950s and 1960s. As members of the Student Nonviolent Coordinating Committee (SNCC), progressive Jewish organizers in the Atlanta office, for example, helped launch the successful 1964 "Genocide in Mississippi"-campaign that decisively contributed to the failure of a proposed sterilization law targeting working-class African-American women. In the late 1960s, increasing African-American support for Palestinian struggles against Israel and the pronounced anti-Zionism voiced by critical freedom struggle leaders from Stokely Carmichael to Huey Newton ended many of these Jewish-African-American collaborations. Racism and anti-Semitism in American society and on U.S. universities campuses that these collaborations and activists addressed, however, have not vanished. If anything, they are on the rise today.

The Center's program on SNCC and the freedom struggles then and now brings together 1960s activists and current ASU student leaders. Continuing the programming begun with visit of Dottie Zellner (SNCC) in early 2015, a coalition of campus groups and Centers will bring Charles E. Cobb, Jr., one of SNCC's former field secretaries in Mississippi during Freedom Summer in 1964, and Si Kahn, the white Jewish progressive singer-songwriter and SNCC veteran from the struggles in Arkansas, to the ASU campus. Cobb will give an evening talk on his important study This Nonviolent Stuff'll Get You Killed in the Blue Ridge Ballroom at the Plemmons Student Union (PSU) at 7:00 pm on Monday, April 25. A panel discussion with Cobb, Kahn, current ASU Hillel President Jaycob Kitain and BSA president Tessa Jackson will follow at PSU's Greenbriar theater at 10:30 am on Tuesday, April 26. The panelists will discuss the past and present challenges and struggles. Si Kahn will also give a concert at the Jones' House on the evening of April 26 to help raise funds for the work of the Centers for Appalachian Studies and for Judaic, Holocaust and Peace Studies. 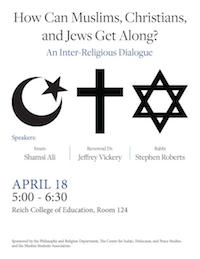 How Can Muslims, Christians, and Jews Get Along?

Islamophobia is once again on the rise in the United States. Anti-Judaism never disappeared. Christian thought has repeatedly been appropriated by religious extremists even in attempts to justify murder--for example of abortion providers. It is, thus, more than time to continue a much-needed interfaith dialogue. Please join us at the Reich College of Education (Room 124) on the ASU campus for a thoughtful and nuanced discussion and Q-and-A with an Imam, Rabbi, and Christian Reverend. 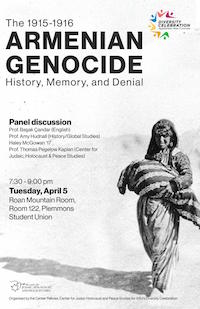 As part of the 2016 Diversity Celebration, a Panel Discussion Organized by the Center Fellows of Appalachian's Center for Judaic, Holocaust, and Peace Studies took place on Tuesday, April 5, at 7:30pm in the Roan Mountain Room of Plemmons Student Union. The event was free and open to the campus community and the public.

Denial is the final stage of genocide. In the early twenty-first century, we are not only observing the unfolding of new genocidal crimes around the globe, but also the rise of genocide denial. The tactics of denial are predictable. Deniers question and minimize the massive evidence, claim that killings do not fit the legal definition of genocide, and even attack and blame the victims.

The denial of the Armenian genocide is one prominent example. Planned and carried out by the government of the Ottoman Empire and the Committee of Union and Progress in 1915-16, this genocide left more than one million Armenian women, men, and children dead. They were systematically killed by regular army and police units, militias, and even ordinary Muslim Turks throughout Anatolia. Deniers of this genocide range from the government of Turkey to individual academics, even in the US and at Appalachian.

This program brought together a panel of Appalachian faculty that discusses Armenian life, the history of this genocide, and its denial. It was organized by the Center Fellows, the student group of the Center for Judaic, Holocaust, and Peace Studies.