Combating Antisemitism in the Western World 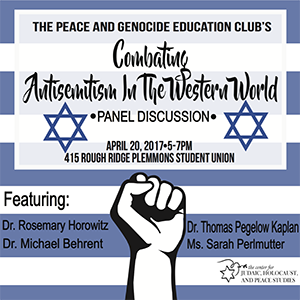 Organized by the Peace and Genocide Education Club, a panel of ASU students and faculty affiliated with the Center for Judaic Holocaust, and Peace Studies will discuss anti-Semitism in its past and present forms. The panel will take place on Thursday, April 20, from 5:00 until 7:00 pm at PSU's 416 Rough Ridge, Room 415. Open to the public and no tickets required. 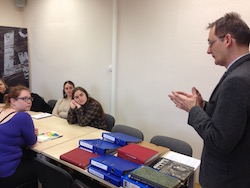 Organized by the Center for Judaic, Holocaust and Peace Studies (CJHPS), ASU students in JHP 3154 carried out research at archives, memorials and documentation centers in Germany and Poland, including the Auschwitz-Birkenau State Museum and the archives of the Sachsenhausen Concentration Camp Memorial, over spring break. Their travels were supported by funding from the  Miriam and Abe Brenner Foundation in cooperation with the Greensboro Jewish Federation, the Rosenblatt Family Foundation, and the German Academic Exchange Service. Come and join us for a presentations on the findings of their research, ranging from the impact of the Wannsee Conference on the fate of "Jewish Mischlinge" in Nazi Germany to the motivations and ideological leanings of Nazi concentration camp commandants. 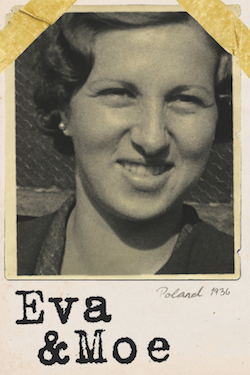 The program will open with a screening of "Eva and Moe," a short film with rare footage of interwar Polish-Jewish family life in the Polish countryside shot by Eva Feld and her husband Moe, Jewish-American newly-weds that visited their family in the old country in 1936. ASU Professor Beth Davison is one of film's executive producers and will offer some brief remarks and answer questions from the audience.

The session will begin at the Beacon Heights Room 417 (4th floor) at Plemmons Student Union on the ASU campus (263 Locust Street) on Thursday, April 27, at 7:30 pm. For more information, please contact the Center for Judaic, Holocaust and Peace Studies at 828.262.2311 or holocaust@appstate.edu.

The Volkswagen Factory and the City of the KdF Car: Nazi Histories and the Politics of Memory after 1945 (Panel in Germany, March 14) 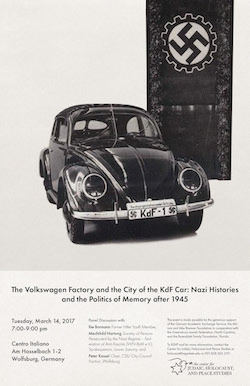 On March 14, 2017, the Center for Judaic Holocaust, and Peace Studies will continue its off-campus outreach programming with a panel discussion in Wolfsburg, Lower Saxony, in the Federal Republic of Germany. The panel focuses on the history of Volkswagen, the City of the KdF Car, and the wartime employment of slave laborers, including Jewish prisoners from Auschwitz. It will also explore how citizens and employees of the city and company remembered these events and crimes after 1945. Panelists include Peter Kassel (Chair of the CDU City Council Faction, Wolfsburg), Ilse Bormann (former Hitler Youth Member and Wolfsburg native), and Mechthild Hartung(Spokesperson, Lower Saxony, for the Society of Persons Persecuted by the Nazi Regime – Federation of Anti-Fascists, VVN-BdA e.V.). The event begins at 7:00 p.m. and takes place the Centro Italiano, Am Hasselbach 1-2, Wolfsburg. To RSVP and for more information, contact the Center for Judaic, Holocaust and Peace Studies at holocaust@appstate.edu or 001.828.262.2311.

In the fall of 1949, the newly founded Federal Republic of Germany and the German state of Lower Saxony became the trustees of the Volkswagen Corporation. While Volkwagen merchandise for sale in the U.S. today highlights 1949 as VW’s founding year, the origins of the company date back to 1937, when Volkswagen was established by the German Labor Front (DAF), the largest Nazi mass organization charged with integrating the German workers into Hitler’s Reich. The Volkswagen (people’s car) designed by the engineer Ferdinand Porsche and endorsed by Adolf Hitler was Germany’s answer to the mass mobilization already underway in the United States. In 1938, the building of a modern car factory got on its way along with the construction of a Nazi model town, the city of the KdF car, named after the Strength Through Joy (KdF) leisure organization that belonged to the DAF. German workers eager to own one of these cars paid millions of Reichsmarks, but none of them ever came to drive a VW in Nazi Germany. Instead, the company switched to armament manufacturing after the outbreak of the war. Threatened by labor shortages, Porsche secured the deployment of slave laborers at the factory, including hundreds of Hungarian Jews that had previously been deported to Auschwitz. The city of the KdF car also became the site of several subsidiary concentration camps. Close to 15,000 forced and slave laborers built arms for the Reich, including parts of the V-1 flying bomb.

After the liberation by American forces in 1945 and the departure of the surviving forced and slave laborers, the city and factory struggled with the memory of these crimes as a Nazi successor party garnered more than sixty percent of the vote in the first local elections in Wolfsburg after the war. In 1998, Volkswagen became the first major German corporation to agree to payments to surviving slave and forced laborers. The Corporation started to give funds to the Foundation Remembrance, Responsibility and Future, a German federal organization set up to oversee the financial compensation to those forced laborers affected by the crimes of the Nazi regime. In addition, VW established a memorial to the slave laborers on the factory grounds. Yet, debates over the Nazi past and how to confront it continue in the city of Wolfsburg. In 2013, members of a local dog club, for example, removed the last remains of the “children’s home” in Wolfsburg-Ruehen after a local chapter of a Nazi victims organization took steps to erect a memorial to the more than 300 babies of forced and slave laborers that the Germans starved to death at the home. The panelists will shed light on these issues and discuss the city and company’s early history along with the politics of memory that are prevalent in the city today. 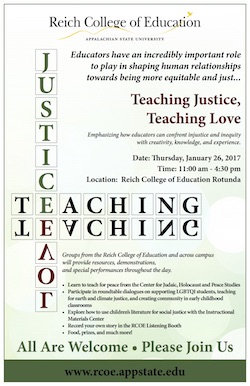 In light of the recent rise in racism and anti-Semitism in NC and the U.S., also and especially in secondary schools and college campuses, the Center for Judaic, Holocaust and Peace Studies will join the Reich
College of Education in its Teaching Justice, Teaching Love event that is based on the belief that educators have an incredibly important role to play in shaping human relationships towards more equitable and just ones.

We hope everyone from the campus and off-campus communities will participate, and encourage faculty to bring your students!

Africana Studies, the Center for Judaic, Holocaust and Peace Studies and professors from the ASU History Department will be hosting an informal open meeting on the 2016 presidential election TODAY, Monday November 14 at 5:30pm in Anne Belk, Room 116, at 224 Joyce Lawrence Lane on the ASU campus.

There will be no lectures or presentations, no advice or answers from experts. Instead, this is an opportunity for you to talk and be heard, to discuss aspects of the election, including the rise of racist and anti-Semitic verbal and physical attacks, with your peers and some of your faculty. Please come. We're at a university. Let's do what universities do, and think about what this historic election means together.