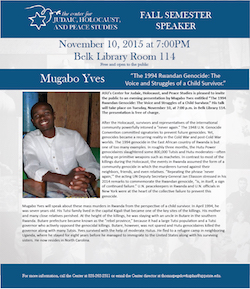 The 1994 Rwandan Genocide: The Voice and Struggles of a Child Survivor

ASU's Center for Judaic, Holocaust, and Peace Studies is pleased to invite the public to an evening presentation by Mugabo Yves entitled "The 1994 Rwandan Genocide: The Voice and Struggles of a Child Survivor." His talk will take place on Tuesday, November 10, at 7:00 p.m. in Belk Library 114 (http://maps.appstate.edu/campus-map/5). The presentation is free of charge.

After the Holocaust, survivors and representatives of the international community powerfully intoned a "never again." The 1948 U.N. Genocide Convention committed signatories to prevent future genocides. Yet, genocides became a recurring reality in the Cold War and post-Cold War worlds. The 1994 genocide in the East African country of Rwanda is but one of too many examples. In roughly three months, the Hutu Power genocidaires slaughtered some 800,000 Tutsis and Hutu moderates—often relying on primitive weapons such as machetes. In contrast to most of the killings during the Holocaust, the events in Rwanda assumed the form of a community genocide in which the murderers turned against their neighbors, friends, and even relatives. "Repeating the phrase 'never again,'" the acting UN Deputy Secretary-General Jan Eliasson stressed in his 2014 remarks to commemorate the Rwandan genocide, "is, in itself, a sign of continued failure." U.N. peacekeepers in Rwanda and U.N. officials in New York were at the heart of the collective failure to prevent this genocide.

Mugabo Yves will speak about these mass murders in Rwanda from the perspective of a child survivor. In April 1994, he was seven years old. His Tutsi family lived in the capital Kigali that became one of the key sites of the killings. His mother and many close relatives perished. At the height of the killings, he was staying with an uncle in Butare in the southern Rwanda. Butare prefecture became known as the "rebel province," because it had a large Tutsi population and a Tutsi governor who actively opposed the genocidal killings. Butare, however, was not spared and Hutu genocidaires killed the governor along with many Tutsis. Yves survived with the help of moderate Hutus. He fled to a refugee camp in neighboring Uganda, where he stayed for eight years before he managed to immigrate to the United States along with his surviving sisters. He now resides in North Carolina.

For more information on his visit, please call the Center at 828-262-2311 or email the Center director at thomaspegelowkaplan@appstate.edu. 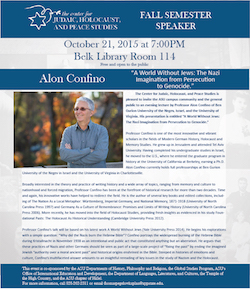 The Center for Judaic, Holocaust, and Peace Studies is pleased to invite the ASU campus community and the general public to an evening lecture by Professor Alon Confino of Ben Gurion University of the Negev, Israel, and the University of Virginia. His presentation is entitled "A World Without Jews: The Nazi Imagination from Persecution to Genocide." It will take place on Wednesday, October 21, at 7:00 p.m. in Belk Library 114. The lecture is free of charge.

Professor Confino is one of the most innovative and vibrant scholars in the fields of Modern German History, Holocaust and Memory Studies. He grew up in Jerusalem and attended Tel Aviv University. Having completed his undergraduate studies in Israel, he moved to the U.S., where he entered the graduate program in history at the University of California at Berkeley, earning a Ph.D. Alon Confino currently holds full professorships at Ben Gurion University of the Negev in Israel and the University of Virginia in Charlottesville.

Broadly interested in the theory and practice of writing history and a wide array of topics, ranging from memory and culture to nationhood and forced migration, Professor Confino has been at the forefront of historical research for more than two decades. Time and again, his innovative works have helped to redirect the field. He is the author of several key books and edited collections including, "The Nation As a Local Metaphor: Württemberg, Imperial Germany, and National Memory, 1871-1918" (University of North Carolina Press 1997) and "Germany As a Culture of Remembrance: Promises and Limits of Writing History" (University of North Carolina Press 2006). More recently, he has moved into the field of Holocaust Studies, providing fresh insights as evidenced in his study, "Foundational Pasts: The Holocaust As Historical Understanding" (Cambridge University Press 2012).

Professor Confino's talk will be based on his latest work, "A World Without Jews" (Yale University Press 2014). He begins his explorations with a simple question: "Why did the Nazis burn the Hebrew Bible"? Confino portrays the widespread burning of the Hebrew Bible during Kristallnacht in November 1938 as an intentional and public act that constituted anything but an aberration. He argues that these practices of Nazis and other Germans should be seen as part of a large-scale project of "fixing the past" by ending the imagined Jewish "authority over a moral ancient past" and historical origins enshrined in the Bible. Steeped in histories of emotions and culture, Confino's multifaceted answer amounts to an insightful rereading of key issues in the study of Nazism and the Holocaust.

This event is co-sponsored by the ASU Departments of History, Philosophy and Religion, the Global Studies Program, ASU's Office of International Education and Development, the Department of Languages, Literatures, and Cultures, the Temple of the High Country, and the ASU chapter of Hillel.

For more information, please call the Center at 828-262-2311 or email the Center director at thomaspegelowkaplan@appstate.edu. 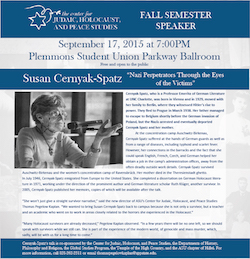 Holocaust survivor Susan Cernyak- Spatz will give a talk titled, "Nazi Perpetrators Through the Eyes of the Victims," on Thursday evening, September 17, at 7 pm in The Plemmons Student Union Parkway Ballroom. The talk is free of charge and open to the public.

Cernyak-Spatz, who is a Professor Emerita of German Literature at UNC Charlotte, was born in Vienna and in 1929, moved with her family to Berlin, where they witnessed Hitler's rise to power. They fled to Prague in March 1938. Her father managed to escape to Belgium shortly before the German invasion of Poland, but the Nazis arrested and eventually deported Cernyak-Spatz and her mother.

At the concentration camp Auschwitz-Birkenau, Cernyak-Spatz suffered at the hands of German guards as well as from a range of diseases, including typhoid and scarlet fever. However, her connections in the barracks and the fact that she could speak English, French, Czech, and German helped her obtain a job in the camp's administration offices, away from the often deadly outside work details. Cernyak-Spatz survived Auschwitz-Birkenau and the women's concentration camp of Ravensbrück. Her mother died in the Theresienstadt ghetto.

In July 1946, Cernyak-Spatz emigrated from Europe to the United States. She completed a dissertation on German Holocaust literature in 1971, working under the direction of the prominent author and German literature scholar Ruth Klüger, another survivor. In 2005, Cernyak-Spatz published her memoirs, copies of which will be available after the talk.

"She won't just give a straight survivor narrative," said the new director of ASU's Center for Judaic, Holocaust, and Peace Studies Thomas Pegelow Kaplan. "We wanted to bring Susan Cernyak-Spatz back to campus because she is not only a survivor, but a teacher and an academic who went on to work in areas closely related to the horrors she experienced in the Holocaust."

"Many Holocaust survivors are already deceased," Pegelow Kaplan observed. "In a few years there will be no one left, so we should speak with survivors while we still can. She is part of the experience of the modern world, of genocide and mass murder, which, sadly, will be with us for a long time to come."

Cernyak-Spatz's talk is co-sponsored by the Center for Judaic, Holocaust, and Peace Studies, the Departments of History, Philosophy and Religion, the Global Studies Program, the Temple of the High Country, and the ASU chapter of Hillel.