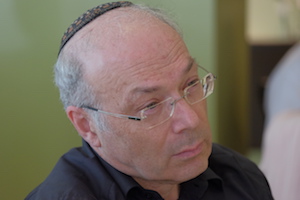 Professor Dan Michman “Holocaust Research Since 1990: Contemporary Contexts and Their Impact on the Comprehension of the Event.”
Thursday, October 26, 2017
7:30 pm
Belk Library and Information Commons, Room 114

The Center for Judaic, Holocaust and Peace Studies has brought many distinguished scholars and historians to the ASU campus in recent years, but few -- if any -- have been as eminent as Professor Dan Michman of Yad Vashem, the World Holocaust Remembrance Center, in Israel.

The ASU community and general public are invited to Professor Michman’s evening lecture on Thursday, October 26, at 7:30 pm in Belk Library and Information Commons, Room 114. The lecture is entitled “Holocaust Research Since 1990: Contemporary Contexts and Their Impact on the Comprehension of the Event.” The lecture is free of charge and no tickets are required.

Professor Michman has been at the forefront of Holocaust research in Israel, North America, and Europe for decades. He holds a Ph.D. from Hebrew University and started his career as a lecturer in Jewish History and Biblical Hebrew at the Dutch-Jewish [Ashkenazi Orthodox] Rabbinical Seminary in Amsterdam in the early 1970s. Born to Holocaust survivors in Holland in 1947, Michman and his family came to Israel in 1957, when his father, Joseph Melkman/Michman was appointed to head Yad Vashem as its general director.

Professor Michman has written 14 books, including Pour une Historiographie de la Shoah: Conceptualisations, terminologie, définitions, problèmes fondamentaux (2001), The Emergence of Jewish Ghettos during the Holocaust (2011), and “Angst vor den Ostjuden.” Die Entstehung der Ghettos während des Holocaust (2011). He has edited 15 more volumes (plus five more under contract) such as Belgium and the Holocaust: Germans, Belgians, Jews (1998) and Hitler, Ha-Shoa veha-hevra ha-germanit (2007) and authored numerous articles in a variety of languages on the history of Dutch and Belgian Jewry, Israeli society and on various aspects of the Shoah, ranging from historiography, ghettos, religious life and Jewish leadership to problems of Jewish refugees, migration, resistance and survivor communities.

The Center will also organize a lunch research colloquium with Professor Michman on Thursday, October 26, that begins at 12:00 noon. To RSVP for the colloquium and to receive the pre-circulated texts, please email the Center at holocaust@appstate.edu or call 828.262.2311.

Organized by the Center and co-sponsored by ASU's Department of History, German Program, Department of Philosophy and Religion, the Honors College, ASU’s Hillel chapter, the Temple of the High Country, Academic Affairs and the Office of International Education and Development. 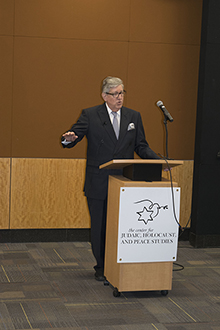 Today, Germany boasts the strongest economy on the European continent. The country has been one of the U.S.' strongest allies during the Cold War, but the November election and policy shifts in Washington, D.C., have put considerable strains on the American-German alliance. Domestically, the refugee crises and acceptance of more than a million refugees has changed the political landscape in Germany. The Alternative for Germany (AfD), an anti-refugee party with racist and anti-Semitic leanings, is slated to become the third largest force in the national parliament in the September 24 election. Germany's still growing Jewish population is facing increasing anti-Semitism and harassment.

The Center for Judaic, Holocaust and Peace Studies invites the ASU community and broader public to a lecture by Honorary Consul of the Federal Republic of Germany Klaus Becker. The Honorary Consul will reflect on the election to the Bundestag, the rise of the AfD, and the party's anti-Semitism. Becker is native of the university town of Marburg in Hesse and grew up in the Ruhr Valley, site of Germany’s main steel producing companies, where his father worked as a technician. He has lived in Germany, Italy, Brazil and the U.S. Today, his international steel trading company, Nirosteel, is based in Charlotte. He has served as President of the N.C. Chapter of the German-American Chamber of Commerce for years. In 2013, he accepted the appointment as the Federal Republic of Germany’s Honorary Consul to North Carolina.

Afterwards, the Center hosts a panel on Jewish Life in Germany Today, especially the rise of hostilities against Jews in the country. Panelists include Julia Schmidt, the Education Director of Temple Kol Tikvah and a former member of the Jewish communities in Cologne and Bonn, Germany, as well as ASU Center director Dr. Thomas Pegelow Kaplan, a German citizen who frequently returns to the country as a research fellow at universities in Berlin, Leipzig or Potsdam. Ms. Schmidt grew up in South Africa and attended an orthodox Jewish Day School. After finishing high school, she earned her BA in the U.S., majoring in English and minoring in German. She moved to Germany and went on to get her Master’s in Teaching English as a Foreign Language from Reading University, UK. She did this through distance study, while working in Germany. She set up her own company in Germany, offering language training to employees of different companies. Her business grew and she ended up teaching many academics in different academic institutions that were involved with education or funding. While she was living in Germany, she first attended the Reform Congregation – Gescher Lemassoret in Cologne. After her son was born, she attended the Conservative synagogue in Bonn, where she resided at the time. Later, she he was loosely associated with the Bonn Synagogue. In NC, she currently serves as the Education Director of Temple Kol Tikvah in Lake Norman.

The program on Monday, September 25, will take place at the Blue Ridge Ballroom 201 AB at Plemmons Student Union. It will begin at 4:30 pm. A reception will follow the panel. Free and open to the public.

For further information, please contact the Center at 828.262.2311 or holocaust@appstate.edu.

Organized by the Center, Mr. Becker’s and Ms. Schmidt's visit, which is part of the program for the “Jewish Life in Germany Today” exhibition, is co-sponsored by ASU's Departments of History, Philosophy and Religion, and Languages, Literatures, and Cultures, the German Studies Program, the Office of International Education and Development, the Temple of the High Country, the local chapter of Hillel, and the German Consulate General in Atlanta, GA. 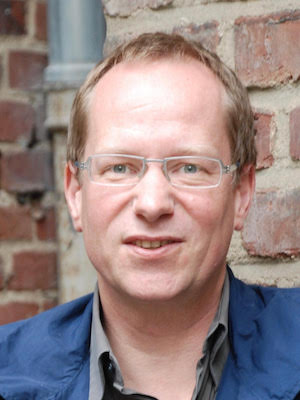 “History in the House of the Hangman: How Postwar Germany Became a Key Site for the Study of Jewish History”

On Monday, Sept. 25, the ASU and broader communities are invited to a public lecture by Prof. Till van Rahden, a renowned specialist in the history of German Jewry. The talk by Prof. van Rahden, who holds the Canada Research Chair in German and European Studies at the Université de Montréal, is entitled "History in the House of the Hangman: How Postwar Germany Became a Key Site for the Study of Jewish History." It will begin at 7:00 pm in the Blue Ridge Ballroom 201 AB, Plemmons Student Union's Summit (2nd floor). His lecture is also part of the programming for the "Jewish Life in Germany Today" exhibition that is currently on display at Plemmons Student Union (first floor).

Prof. Till van Rahden works on European history, including Jewish history, since the Enlightenment and is interested in the tension between the elusive promise of democratic equality and the recurrent presence of diversity and moral conflicts. He holds an M.A. in American history from Johns Hopkins University and PhD in history from the University of Bielefeld, Germany. In 2017, he is based at the "Forschungskolleg Humanwissenschaften" in Bad Homburg, Germany, as a senior research fellow. Van Rahden is the author of the award-winning Juden und andere Breslauer published by Vandenhoeck & Ruprecht in 2000. Van Rahden has also co-edited Juden, Bürger, Deutsche: Zur Geschichte von Vielfalt und Differenz 1800-1933 (Tübingen, 2001), Demokratie im Schatten der Gewalt: Geschichten des Privaten im deutschen Nachkrieg (Göttingen, 2010), and Autorität: Krise, Konstruktion und Konjunktur (Paderborn, 2016). His most recent publications include the monograph Jews and other Germans: Civil Society, Religious Diversity and Urban Politics in Breslau, 1860-1925 (Madison, 2008) as well as essays in German History and the renowned Historische Zeitschrift. 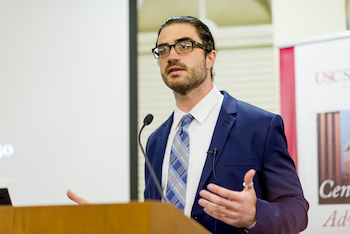 'Of course, they were Neighbors': Testimony, Archives and the Holocaust in Ukraine.

At 7:00 pm on Monday, August 28, Dr. Jared McBride (UCLA), a Holocaust scholar who specializes in the regions of Russia, Ukraine, and Eastern Europe, will give a talk on "'Of course, they were Neighbors': Testimony, Archives and the Holocaust in Ukraine." A recipient of the USC Shoah Foundation Center for Advanced Genocide Research’s Douglas and Margee Greenberg Research Fellowship, McBride will extensively incorporate video testimony from Jewish survivors that are part of the USC Shoah Foundation's impressive Visual History Archive. With more than 55,000 interviews, the archive is the largest collection of survivor accounts worldwide and has recently become fully accessible at ASU.

The evening talk will take place at Belk Library and Information Commons, Room 114. The events is a collaboration between ASU's Center for Judaic, Holocaust, and Peace Studies and the USC Shoah Foundation Center for Advanced Genocide Research.

For more information, please visit the Center website at https://holocaust.appstate.edu/ or call 828.262.2311.