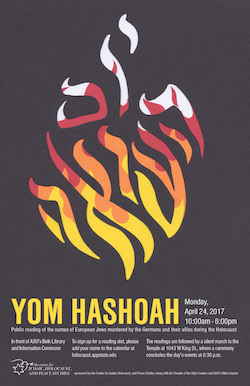 Monday, April 24
10am - 6pm
Between ASU’s Belk Library
and the University Bookstore

On Monday, April 24, Yom HaShoah (Holocaust Memorial Day), the Center for Judaic Holocaust, and Peace Studies along with the Temple of the High Country and ASU’s Hillel chapter will organize a public reading of the names of European Jews murdered by the Germans and their allies during the Holocaust. This reading is scheduled to take place from 10:00 am until 6:00 pm in the outside square between ASU’s Belk Library and the University’s Bookstore in Plemmons Student Union (end of College Street).

After the readings, participants and other campus and community members will walk in silence to the Temple of the High Country (1043 West King Street), where a ceremony that encompasses the lighting of candles and the saying of the mourner’s Kaddish will conclude the day’s events, starting at 6:30 pm. ASU students, staff, faculty, members of the Temple and the Boone community at large are invited to sign up for one of the ten-minute reading slots ahead of time and participate. We hope that many members of the ASU and Boone communities will participate, linger and contemplate for as long as they like, and join us on the silent march and the ceremony at the Temple led by Hillel President Marisa Fernandez, Skip Rackmill and other members of the Temple.

The United States Congress established the Days of Remembrance as our nation’s annual commemoration of the Holocaust. This genocide was the state-directed, systematic destruction of six million European Jews and millions of others, ranging from homosexuals and Soviet POWs to Roma and people with real and imagined disabilities by the Germans and their collaborators between 1933 and 1945.

Since 1982, the United States Holocaust Memorial Museum, created by Congress as a permanent living memorial to this genocide’s victims, has organized and led the national Days of Remembrance ceremony in the US Capitol Rotunda. Year after year, the museum staff marks this event together with Holocaust survivors, liberators, members of Congress, White House officials, the diplomatic corps, and community leaders.

The recalling of the names of the deceased and murdered is not only an important part of Jewish religious practices. It also serves as a practice for individuals of all backgrounds, faiths, and cultures to commemorate the victims. Much more than a devastating part of Jewish history, the Holocaust is truly an event in global history. The Holocaust’s crimes of unimaginable cruelty offer opportunities to recommit to the need for respect for all people and to reflect on the moral responsibilities of individuals and communities today.

To sign up for a reading spot, please follow this link and add your name to the calendar.

For more information on the public readings, please contact the Center at 828.262.2311 or email holocaust@appstate.edu. For the ceremony at the Temple, please email templeofthehighcountry@gmail.com or Hillel President Marisa Fernandez at fernandezme@appstate.edu. 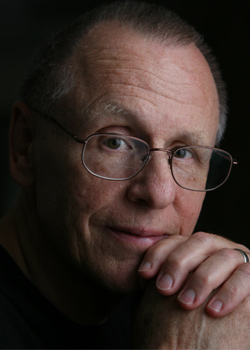 ASU's Center for Judaic, Holocaust and Peace Studies invites the public to an evening talk by John K. Roth, Edward Sexton Professor Emeritus of Philosophy, Claremont McKenna College. Professor Roth's lecture will focus on "Failures of Ethics: Comprehending Genocide and Atrocity" and take place on Wednesday, March 1, 2017 at 7:00 pm at the Turchin Center for the Visual Arts (423 West King Street) on the ASU campus in Boone. This lecture is part of a cooperation between ASU's Center for Judaic, Holocaust and Peace Studies and Davidson College's Vann Center for Ethics, the Greenspon Center for Peace and Social Justice at Queens University, as well as the Center for Holocaust, Genocide and Human Rights Studies at UNC Charlotte. The visit is also co-sponsored by ASU's Hillel chapter and the Department of Philosophy and Religion. The event is free and open to the public.

Professor Roth is a renowned and prolific scholar of philosophy, religion, and Holocaust Studies. He served as the Founding Director of the Center for the Study of the Holocaust, Genocide, and Human Rights (now the Center for Human Rights) at Claremont McKenna College. Professor Roth has published hundreds of articles and reviews, and authored, co-authored, or edited more than fifty books, including Approaches to Auschwitz; Ethics During and After the Holocaust; The Oxford Handbook of Holocaust Studies; Rape: Weapon of War and Genocide; Encountering the Stranger: A Jewish-Christian-Muslim Trialogue; The Failures of Ethics: Confronting the Holocaust, Genocide, and Other Mass Atrocities; and Losing Trust in the World: Holocaust Scholars Encounter Torture. Roth has been Visiting Professor of Holocaust studies at the University of Haifa, Israel. He has also been honored with a Koerner Visiting Fellowship at the Oxford Centre for Hebrew and Jewish Studies in England and as the Ina Levine Invitational Scholar at the Center for Advanced Holocaust Studies, United States Holocaust Memorial Museum. In addition to holding several honorary degrees, Roth was named the 1988 U.S. National Professor of the Year by the Council for Advancement and Support of Education and the Carnegie Foundation for the Advancement of Teaching. Besides serving on the United States Holocaust Memorial Council, he also has received the Holocaust Educational Foundation's Distinguished Achievement Award for Holocaust Studies and Research.

For more information, please contact ASU's Center at 828.262.2311 or holocaust@appstate.edu.

Dr. Edward Westermann will give a public lecture for the campus and community on his recent book, Hitler’s Ostkrieg and the Indian Wars: Comparing Genocide and Conquest 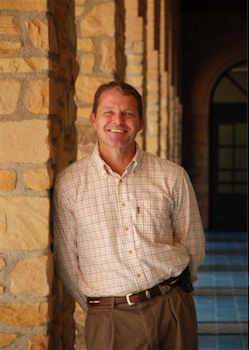 Dr. Edward Westermann will give a public lecture for the campus and community on his recent book, Hitler’s Ostkrieg and the Indian Wars: Comparing Genocide and Conquest (University of Oklahoma, 2016) on February 2 at 7PM in 114 Belk Library, 218 College Street, Boone, NC, 28607. All are welcome to attend.

In Hitler’s Ostkrieg and the Indian Wars, Westermann critically examines the parallels Hitler drew between the Nazi quest for Lebensraum in Eastern Europe and the westward expansion of the United States known as Manifest Destiny.  Westermann shows how both projects linked national identity with racial stereotypes in order to justify a politics of exclusion and violence.  He also identifies crucial differences between these projects of national expansion.

Westermann’s book has been described as “comparative history at its best.”  One reviewer writes:  “This thoughtful, provocative book compares the Nazi occupation of Eastern Europe with the United  States’ conquest of the American West. Its insights and conclusions are sure to stimulate new debates among a broad array of scholars.”  Robert Wooster, author of The American Military Frontiers: The United States Army in the West, 1783–1900

Edward Westermann is Professor of History at the University of Texas—San Antonio. He also serves as the Distinguished Scholar in Residence at the Holocaust Memorial Museum of San Antonio. Westermann has received numerous awards and distinctions. He was a Fulbright Fellow at the Free University of Berlin, a German Academic Exchange Service fellow on three occasions, as well as a fellow at the US Holocaust Memorial Museum.  Dr. Westermann also the author of Hitler’s Police Battalions:  Enforcing Racial War in the East (2006), and numerous articles and chapters.  He is a retired US Air Force Colonel with 25 years of service.

Dr. Westermann’s visit is sponsored by the Humanities Council and the Center for Judaic, Holocaust, and Peace Studies. For more information, please contact the Council at 828-262-2483 or the Center at 828.262.2311.