This minor, consisting of 18 semester hours, introduces students to the interdisciplinary study of the Holocaust and other modern genocides. In order to comprehend practices of systematic mass murder and genocidal societies, it is pivotal to draw on a variety of fields in order to scrutinize a multilayered source base, ranging from film and photography to literary, diplomatic and government sources, such as: 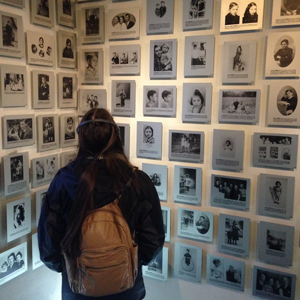 Caption: A student minor in the program reflecting on the images of murdered Jews at the Auschwitz-Birkenau State Museum. Photo by the Center.

Faculty members from various Appalachian departments and colleges are working with students to this end. The study of the Holocaust and modern genocides provides insights into the preconditions and unfolding of systematic mass murder, how ordinary men and women come to participate in these crimes and the responses, “choiceless choices” (Lawrence L. Langer) and acts of contestation by victimized populations. These explorations also center on possible forms of intervention and problematize silence in the face of genocide, always combining analysis with reflections on social and civic responsibilities.

This minor combines the study of the Holocaust with a multi-layered examination of Judaism and histories of Jewish populations worldwide that cannot be reduced to ongoing episodes of violence. Over the centuries, Jewish communities developed a complex theology, laws and cultural traditions. Many of these traditions also inform practices of waging peace, which is at the core of the minor's third focus. Combined with a knowledge of Jewish cultures and histories, as well as meanings of the Holocaust, the exploration of theories and languages of peace studies underpin the search for human improvement and a world increasingly free of violence and genocide.

The Center for Judaic, Holocaust and Peace Studies supports this minor by

Supported by the Center for Judaic, Holocaust,and Peace Studies

In 2017, a new course was offered - JHP/HIS 3154: "The Holocaust: Interpretation, Memory and Representation." This upper-level course evolved around an extended spring-break research excursion to memorials and research centers. Participants meet with survivors, rescuers, historians and archivists. In spring 2017, course participants traveled to Germany and Poland, including to the Auschwitz-Birkenau State Museum and the House of the Wannsee Conference Memorial and Educational Site. These excursions were financially supported by the Center and fellowships from the Miriam and Abe Brenner Foundation in cooperation with the Greensboro Jewish Federation and the Rosenblatt Family Foundation. The German Academic Exchange Service has also provided funds for the 2017 group research trip.

The class examined the origins and execution of the Nazi genocide during the Second World War, as well as the realities and responses of European Jews. It also explored key issues in the memorialization and representation of the Holocaust in postwar Germany, the United States and Israel. Participants worked on research projects based on their archival work in the visited countries. They gave presentations on their work abroad and at home and had opportunities to publish their research.

The next study abroad excursion (tentatively, originally postponed due to COVID) will take place in Israel. Class participants will, among others, visit and do research at Yad Vashem, the World Holocaust Remembrance Center in Jerusalem, the Wiener Library at Tel Aviv University and at the Ghetto Fighters' House Museum at the Ghetto Fighters' Kibbutz in Western Galilee. Students will meet with leading Israeli scholars, present their work at Israeli institutions and learn from Holocaust survivors. For more information, contact the coordinator of the minor, Dr. Thomas Pegelow Kaplan, thomaspegelowkaplan@appstate.edu.