Dr. Thomas Pegelow Kaplan, the Leon Levine Distinguished Professor and Director of the Center for Judaic, Holocaust, and Peace Studies, just published a new co-edited collection on Jewish petitioning during the Shoah with Dr. Wolf Gruner, the Director of the USC Shoah Foundation Center for Advanced Genocide Research and Shapell-Guerin Chair in Jewish Studies at the University of Southern California. Entitled Resisting Persecution: Jews and their Petitions during the Holocaust, the volume brings together essays by prominent senior and junior Holocaust scholars based in North America, the UK, continental Europe and Israel to reevaluate a massive, but largely misinterpreted and neglected collection of sources of Jewish responses to the fascist onslaughts. 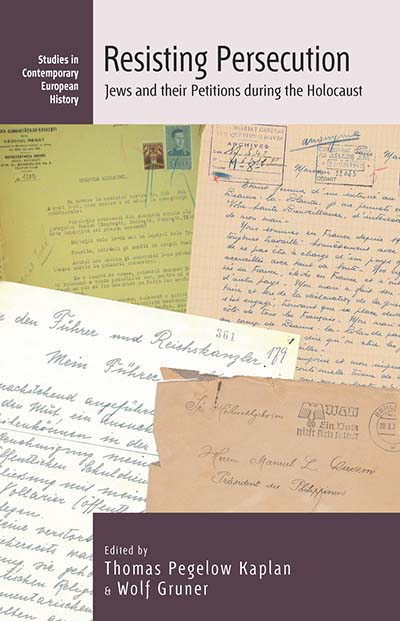 During the Shoah, tens of thousands of European Jews turned to individual and collective petitions in the face of state-sponsored violence. The volume offers the first extensive analysis of petitions authored by Jews in nations ruled by the Nazis and their allies. It demonstrates their underappreciated value as a historical source and reveals the many attempts of European Jews to resist intensifying persecution and actively struggle for survival.

The initial responses have been very positive. Marian A. Kaplan (no relation), NYU's Skirball Professor of Modern Jewish History, has praised the book as "a thought-provoking and entirely new approach to Holocaust Studies. Challenging those who claim Jews were 'passive' victims or that only political or armed defiance can “count” as resistance, this volume distinctly reveals that despite having far less power than the authorities, Jews demonstrated agency, protested -- even defied -- persecution, and, in some instances, succeeded." The volume appeared with Berghahn Books in New York City and is available for purchase as an e-book and hardcopy.

Amy Hudnall to serve as interim director of the Center for Judaic, Holocaust and Peace Studies

Amy Hudnall to serve as interim director of the Center for Judaic, Holocaust and Peace StudiesAmy C. Hudnall is an alumna of CAS, earning a B.A. ...