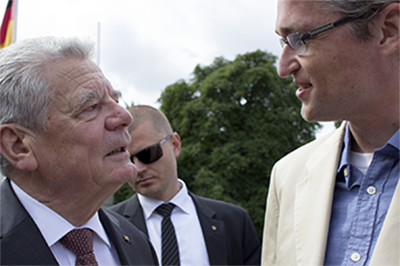 Prof. Pegelow Kaplan in conversation about the Center with then German President Joachim Gauck in Berlin

After a seven-year tenure, Dr. Thomas Pegelow Kaplan has resigned from the position of Director of the Center for Judaic, Holocaust, and Peace Studies, the Leon Levine Distnguished Professorship and the Full Professorship in ASU's History Department. The resignation will be effective as of June 30.

Prof. Pegelow Kaplan, a German-born Holoaust scholar who enlisted his international networks to build the Center, oversaw the successful roll-out of numerous programs and initiatives. His primary goals were to bring the Center's work on a solid research footing and globalize its reach and collaborations. Under his leadership, the Center (co-)organized a series of academic conferences in the US and Israel with a broad range of national and international partners from the Southeast German Studies Consortium to Western Galilee College (WGC)'s Holocaust Studies Program and from the USC Shoah Foundation, LA, to the Center for Rearch on Antisemitism at the Technical University of Berlin, Germany. A leading Israeli scholar called the last conference on the Jewish Enlightenment in March 2022 "a milestone in Haskalah studies." Pegelow Kaplan built on his predecessor's summer study abroad program in France and Germany by introducing and leading group research excursions in Germany, Poland, Israel, and Washington, D.C., that allowed student-scholars to work at leading archives and memorials, including Yad Vashem and the Auschwitz-Birkenau State Museum, present their work to scholars and students at institutions from the University of Silesia, Poland, to the Mandel Center for Advanced Holocaust Studies at the United States Holocaust Memorial Museum, and discuss their research with and learn from Holocaust survivors, archivists, memory workers, and leading scholars in the field. All along, he raised tens of thousands of dollars to pay for the students' expenses. Under his guidance, the Center introduced an annual student research prize in JHPS and individual student travel and research grants to Israel. Last month, the latest grant recipients went to Israel to work in various archives and museums, including the Ghetto Fighters House Museum near Akko that was established by survivors of the 1943 Warsaw Ghetto Uprising. He also co-envisioned and collaborated with Israeli colleagues at WGC to establish a course exchange that now allows ASU students to study with Jewish- and Arab-Israeli students challenging topics of the Shoah in virtual classrooms. The initial rendition that just ended in May focussed on medicine and the Holocaust and combined the class with an international lecture series on the topic that featured the work of leading Israeli, Polish and American scholars and will be featured in a forthcoming issue of the prominent British medical journal The Lancet. He worked with previous CAS Dean Prof. Neva Specht on bringing the Visual History Archive of the USC Shoah Foundation with its 55,000 survivor interviews to campus at a time when fewer than 100 institutions worldwide had access. Pegelow Kaplan also launched collaborative publication projects with a range of partners, including Prof. Ofer Ashkenazi, the head of the Richard Koebner Minerva Center for German History at the Hebrew University in Jerusalem, that has brought together many prominent and emerging scholars from around the world in projects from the significance of photography in Jewish history and memory to the future of Holocaust testimonies at the end of the age of the witness. Pegelow Kaplan initiated a Senior Center Fellows program designed to attract prominent scholars and/or public intellectuals in the fields of JHPS to campus for a term of teaching, researching and networking with members of the community. The first recipient, Kostek Gebert, one of the leading voices of Polish Jewry today, was almost en route to ASU when the pandemic hit and delayed the roll-out of the program. He launched a lunch research colloquium series and a speakers program that brought more than 50 of the leading scholars in the fields of Holocaust, Genocide and Jewish Studies to campus (or, with the outbreak of the pandemic, on screen), ranging from Prof. Dan Michman, the head of Yad Vashem's International Institute for Holocaust Research to Prof. Stefanie Schueler-Springorum, the director of the Zentrum fuer Antisemitismusforschung in Berlin, Germany, and from Prof. Christopher R. Browning of Tacoma, WA, to Professor Lerna Ekmekçioğlu, specialist in modern Turkish and Armenian History at MIT, who lost many family members in the Armenian Genocide of 1915 to 1918. In fact, Prof. Pegelow Kaplan organized dozens of talks by genocide survivors on campus. Some like the one given by Dr. Susan Cernyak-Spatz attracted some 800 people and forced the Fire Department to close the entrance to the venue. He used and built on these programs to create a database of talks and testimonies that is now available to the public via the website of the Center.

Also on campus, Prof. Pegelow Kaplan oversaw the move of the Center to its largest home to date, a six-office suite in Edwin Duncan Hall that has also room for a Library and Research Center in the style of German Institutsbibliotheken. The book collection alone has tripled in size in recent years. The new library is just about to open and can be accessed by anyone free of charge. He enlarged the Center's staff, one of its newest members will continue work on the new Center Archive in Fall 2022. Pegelow Kaplan has worked with ASU students interested in the Center's areas of study to launch a new student club, the Peace and Genocide Education Club, which has organized numerous events of note on its own, including a symposium on Armenian genocide denial, in which an ASU faculty member was engaging at the time, and was awareded with the “Outside the Box” award from Appalachian State's Club Council in 2021. At the Center, Pegelow Kaplan helped to appoint many faculty members from ASU's different colleges to core new committees and introduced affiliate faculty status that allowed faculty to work more closely with the Center and benefit from initiatives like special funds to attend training workshops in Holocaust or Peace Studies. With various committee members, especially Prof. Amy Hudnall, who served as co-coordinator, he revamped the minor in Judaic, Holocaust, and Peace Studies, adding new courses, including gateway classes in Holocaust and Peace Studies. Temporarily, some two dozen students were enrolled in the small, but vibrant minor. Most dear to many of the first generation of the Center's community supporters, he led and restructured the annual Martin and Doris Rosen Summer Symposium on Remembering the Holocaust for secondary-school teachers from NC, the US, and abroad and brought the renowned Holocaust educator Dr. Racelle Weiman to Boone as co-director. Introducing a distinct theme for each of the symposia, Pegelow Kaplan spearheaded programs and collaborations, for example, with the Hayes School of Music that centered on Music during and after the Shoah. It allowed participants and audience members to learn from Anita Lasker-Wallfisch, one of the last survivors of Auschwitz women's orchestra, see Brundibar, the children's opera performed in the Nazi ghetto of Terezin, on stage at the the HSoM (while learning from the daughter of the late Ela Weissberger who played the cat dozens of times back in 1943-44) and listen to Yiddish antifascist songs written by persecuted Jews in the German-occupied Soviet Union sung by an ASU student one of whose relatives was incarcerated in Nazi camps.

"It has really been a distinct pleasure to work with so many faculty colleagues, students, staff and community members at ASU and in Boone," said Prof. Pegelow Kaplan recently, "who are so deeply committed to the Center, its work and mission. Together, we managed to adanced Jewish, Holocaust and Peace Studies at ASU, in the High Country, NC, the region, the US and abroad. I have no doubt that the Center is going to be successful in the future and can soar to greater heights. In times of rising illiberalism, antisemitism and racism in Appalachia, NC, the US, Germany and elsewhere, its importance will only increase. I am profoundly grateful to everyone who has been part of this journey during these past seven years to advance our shared goals."

Prof. Pegelow Kaplan will work on the transition and cooperate with a yet to be named interim director. He will also still lead the symposium this July, the Center's twentieth anniversary event, and the international memorial conference for Prof. Rosemary Horowitz z''l on August 1 before leaving the High Country. He will then start as the newly-appointed Louis P. Singer Endowed Chair in Jewish History at the University of Colorado Boulder, the state's flagship public research university.