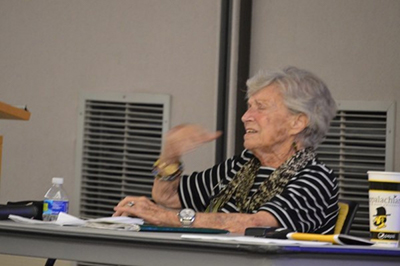 The Center for Judaic, Holocaust, and Peace Studies mourns the passing of Dr. Susan Cernyak-Spatz, a professor emerita of German literature at UNC Charlotte and frequent participant and speaker at Center events at ASU. Cernyak-Spatz, one of the very last adult survivors of Auschwitz in the state, was a forceful advocate against the rise of anti-Semitism and white supremacy in North America and beyond. She never tired to help her many audiences understand how the Austrian and German Nazis were able to build a dictatorship and carry out genocidal killings of Europe’s Jewish populations. Cernyak-Spatz always spoke her mind and did not shy away from any controversial stance, denying, for example, that there was a God in Auschwitz or comparing the beginnings of the Trump Presidency with the final years of Austria prior to the Anschluss to Nazi Germany. Her passing is a very painful reminder that more and more of the remaining survivors will leave us in the nearer future with far-reaching consequences for Holocaust education, which Cernyak-Spatz championed and engaged in so well for decades. 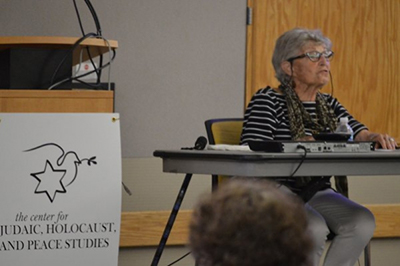 Susan Cernyak-Spatz was born into a middle-class Jewish family in Vienna in 1922. In 1929, she moved with her family to Berlin, where they witnessed
Hitler’s rise to power. The family escaped to Prague in March 1938 only to come under Nazi rule once again, when Hitler ordered German troops to occupy Czechoslovakia in March 1939. Her father managed to escape to Belgium shortly before the German invasion of Poland, but the Nazis arrested and eventually deported Cernyak-Spatz and her mother to the Theresienstadt/Terezin ghetto in 1942.

At age 20, Cernyak-Spatz was transferred to Auschwitz. She suffered at the hands of German guards at the Birkenau concentration and death camp, as well as from a range of diseases, including typhoid and scarlet fever. However, her connections to older prisoners in the barracks and the fact that she could speak English, French, Czech and German helped her obtain a job in the camp’s administration offices, away from the often deadly outside work details. She survived Auschwitz-Birkenau and the Ravensbrück women’s concentration camp, while her mother was murdered in one of the death centers in German-occupied Poland.

In July 1946, Cernyak-Spatz emigrated from Europe to the United States. She completed a dissertation on German Holocaust literature in 1971, working under the direction of the prominent author and German literature scholar Ruth Klüger, another survivor. In 2005, she published her memoirs. For close to four decades, she gave countless talks at schools, community centers, synagogues, and universities predominantly in the United States and Germany. She was unyielding in her efforts to prevent the rise of anti-Semitism and any attempt to overthrow postwar democracies, especially in Central Europe. In light of the recent attacks on synagogues in Germany, a lot of work needs to be done… now inspired by her life-long work and activism.

Professor emerita Dr. Cernyak-Spatz died in Charlotte on Nov. 17, 2019. She is survived by her two daughters Jackie and Wendy Fishman, their spouses, and her grandchildren, including Elias Pentes, a sophomore at ASU, who is active in the Center for Judaic, Holocaust and Peace Studies.

To commemorate her life and struggles, the Center is cooperating with AppTV to broadcast the recording of her last public event at ASU in October 2018 before the end of the term.