At the end of this term, the Peace and Genocide Education Club (PGEC) garnered another recognition by receiving the 2021 “Outside the Box” award from Appalachian State Club Council. The award recognized “an organization that continuously shows tremendous creativity and originality.” The prize committee was impressed by PGEC’s approach and programming. “We believe,” PGEC leaders stated, “that peace looks different from person to person and we would love to know what it looks like for other people.”

Towards this end, Club members organized, among others, a ZOOM-based event with Dr. Roxanne Dunbar-Ortiz, a Professor emerita in Native American Studies at California State University East Bay, who spoke on “Settler Colonialism in Appalachia.” “By having conversations about colonialism’s effect on the original inhabitants of this area as well as the legacies of colonialism that still benefits some and harms others,” the prize committee approvingly quoted PGEC, “we hope to reduce complicity and become active participants in diverse and truthful tellings of history.” 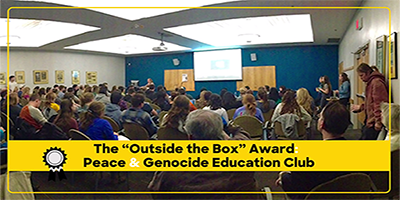 The Peace and Genocide Education Club was established in 2016 as part of a restructuring of the Center Fellows and continues to work closely with the Center for Judaic, Holocaust and Peace Studies (CJHPS), whose director serves as PGEC faculty advisor. The Club’s first cohort made its mark by organizing a panel on the denial of the Armenian genocide in 1915-16, which was the matter of considerable controversy on campus at the time. A picture shared during April's online award ceremony depicted this 2016 panel and evoked the Club’s origins.

The current cohort of PGEC members, including Club President Alan-Joshua Carrasco, has continued this crucially important work and CJHPS and the campus community are looking forward to many more years of Peace and Genocide Education Club activities and programming.

For more information, please contact the Center at 828.262.2311 or holocaust@appstate.edu.