During the July 4 weekend, the car of an Appalachian State University student was covered with swastikas and racist slurs. The assailant(s) scratched the hate speech and images into the side and back of the car. The student, who is in Boone during the summer, had his vehicle parked at the university's basketball stadium on East campus. App State campus police have been notified of this racist attack. 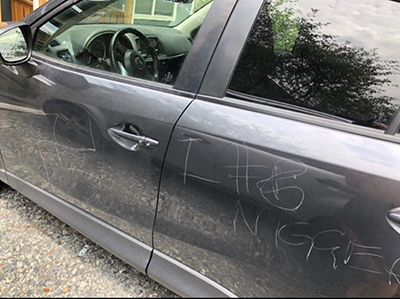 The incident is one of too many that have taken place in greater numbers in town and on campus since 2016. The Center for Judaic, Holocaust, and Peace Studies has documented these attacks as much as possible. During this ongoing pandemic, which has been quickly misused by White nationalists and neo-Nazis to advance their racist agendas, and intensifying political conflicts this fall, more such events can be expected.

Together with various off- and on-campus partner institutions, the Center will continue and step up its work and programming against antisemitism and any form of racism and racist bigotry. As the Center has stated repeatedly, we encourage all members of the campus and community to learn more about hate groups and propaganda in NC, the US, and worldwide. We also ask everyone to openly discuss how to address and reduce their influence and ponder the structural racism that pervades US society. And we ask everyone to strengthen and embrace our shared values of learning about and actively valuing difference in our community and promoting equality and trust. Silence is not an option.

For more information, please contact the Center at 828.262.2311 or holocaust@appstate.edu.