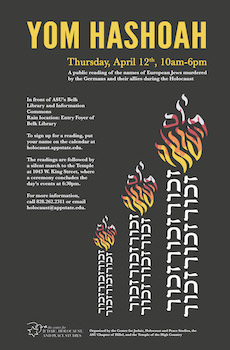 On Thursday, April 12, Yom HaShoah (Holocaust Memorial Day), the Center for Judaic, Holocaust, and Peace Studies along with Appalachian State’s Hillel chapter and the Temple of the High Country and will organize a public reading of the names of European Jews murdered by the Germans and their allies during the Holocaust. This reading is scheduled to take place from 10:00 am until 6:00 pm in the outside square between ASU’s Belk Library and the University’s Bookstore in Plemmons Student Union (rain location: Belk Library's Entry Foyer).

After the readings, participants and other campus and community members will walk in silence to the Temple of the High Country (1043 West King Street), where a ceremony that encompasses the lighting of candles and the saying of the mourner’s Kaddish will conclude the day’s events, starting at 6:30 pm. ASU students, staff, faculty, members of the Temple and the Boone community at large are invited to sign up for one of the ten-minute reading slots ahead of time and participate. We hope that many members of the ASU and Boone communities will participate, linger and contemplate for as long as they like, and join us on the silent march and the ceremony at the Temple led by Hillel President Marisa Fernandez and members of the Temple. 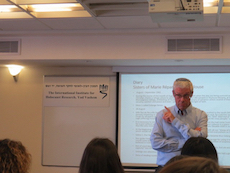 This year, the Center also co-organizes the Yom HaShaoh events with the help of colleagues from Yad Vashem, the World Holocaust Remembrance Center, in Jerusalem and the Campus Outreach Lecture Program of the United States Holocaust Memorial Museum's Jack, Joseph and Morton Mandel Center for Advanced Holocaust Studies, supported by the Leonard and Sophie Davis Fund. The events starts on the evening of Wednesday, April 11, with a public lecture by Eliot Nidam, the Head of the Academic Affairs Section of the International Institute for Holocaust Research at Yad Vashem. His talk is entitled “Living with the Other: Religious Congregations in France and the Hiding of Jews During the Holocaust.” It will begin at 7:00 pm in the Blue Ridge Ballroom 201 AB, Plemmons Student Union's Summit (2nd floor).

The United States Congress established the Days of Remembrance as our nation’s annual commemoration of the Holocaust. This genocide was the state-directed, systematic destruction of six million European Jews and millions of others, ranging from homosexuals and Soviet POWs to Roma and people with real and imagined disabilities by the Germans and their collaborators between 1933 and 1945.

Since 1982, the United States Holocaust Memorial Museum, created by Congress as a permanent living memorial to this genocide’s victims, has organized and led the national Days of Remembrance ceremony in the US Capitol Rotunda. Year after year, the museum staff marks this event together with Holocaust survivors, liberators, members of Congress, White House officials, the diplomatic corps, and community leaders.

The recalling of the names of the deceased and murdered is not only an important part of Jewish religious practices. It also serves as a practice for individuals of all backgrounds, faiths, and cultures to commemorate the victims. Much more than a devastating part of Jewish history, the Holocaust is truly an event in global history. The Holocaust’s crimes of unimaginable cruelty offer opportunities to recommit to the need for respect for all people and to reflect on the moral responsibilities of individuals and communities today.

To sign up for a reading spot, please follow this link and add your name to the calendar.