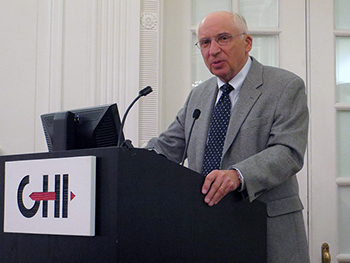 On Tuesday, Sept. 12, the ASU and broader communities are invited to a public lecture by eminent historian Prof. Konrad H. Jarausch. Jarausch, the Lurcy Professor of European Civilization at UNC-Chapel Hill, will give an evening lecture entitled “Broken Lives: How Ordinary German Jews and Gentiles Experienced the Twentieth Century.” It will begin at 7:00 pm in Plemmons Student Union's Summit Trail Solarium. His talk will also serve as a keynote that marks the opening of the "Jewish Life in Germany Today" exhibition. A reception and walk-through of the exhibit will follow the talk.

Professor Jarausch has written or edited some forty books in modern German and European history. Starting with Hitler’s seizure of power and the First World War, his research interests have moved to the social history of German students and professions German unification in 1989/90, with historiography under the Communist GDR, the nature of the East German dictatorship, as well as the debate about historians and the Third Reich and the Holocaust. More recently, he has been concerned with the problem of interpreting twentieth-century German history in general and the learning processes after 1945.