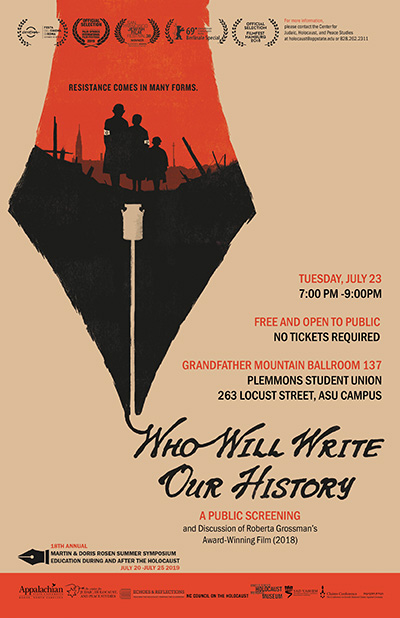 Appalachian State University’s Center for Judaic, Holocaust, and Peace Studies invites the public to a public screening and discussion of Roberta Grossman and Nancy Spielberg's Award-Winning Film Who Will Write Our History from 7:00 – 9:00 pm on Tuesday, July 23. The film focuses on a group of Jews imprisoned in the Warsaw Ghetto who risked their lives so that the truth about the Nazi regime’s genocide would survive, even if they did not. The even twill take place at Grandfather Mountain Ballroom, Room 137, in Appalachian State University’s Plemmons Student Union (263 Locust Street). The presentation and discussion are free and open to the public and no tickets are required.

In November 1940, days after the Nazis sealed close to half a million Jews in the Warsaw Ghetto, a group of journalists, scholars, and community leaders decided to fight back. Led by historian Emanuel Ringelblum (1900-1944) and known by the code name Oyneg Shabes, this clandestine group vowed to defeat Nazi lies and propaganda not with guns or fists but with pen and paper. Members of the group meticulously documented the suffering and death in the ghetto in tens of thousands of documents. Other members of the group included Rabbi Shimon Huberband (1909-1942), who centered on religious life in the ghetto and Jewish communities. Abraham Lewin (1893-1943), a school teacher, kept a diary of the terrible events and conditions in the ghetto and included it in the Oyneg Shabes archive. The group, finally, buried the entire collection in three caches before the destruction of the Warsaw Ghetto by the Nazis.

Now, for the first time, the story of this group is told as a feature documentary. Written, produced and directed by Roberta Grossman and executive produced by Nancy Spielberg, Who Will Write Our History mixes the writings of the Oyneg Shabes archive with new interviews, rarely seen footage and stunning dramatizations to transport viewers inside the Ghetto and the lives of these resistance fighters. They defied their murderous enemy with the ultimate weapon – the truth. Two of the caches were found after the war, in 1946 and 1950. More than 60,000 documents reappeared in the metal boxes and milk cans and have been invaluable to scholars and educators as they wrote and told the histories of the Jews in the largest of the Nazi-established ghettos in Poland.

The screening and subsequent discussion are part of the 18th Annual Martin and Doris Rosen Summer Symposium on Remembering the Holocaust that takes place from July 20 until 25, 2019, at Appalachian State University’s Plemmons Student Union and select other venues on campus and in town. This year’s symposium explores the multi-fold connections between the Holocaust and education. Attendees and participants will not only learn and ponder how the Nazi regime relied on schooling to secure support for its participatory dictatorship and racist policies, but also how persecuted Jews across German-controlled Europe enlisted education as a form of spiritual resistance and Amidah, even in the ghettos and camps. Moreover, the symposium will shed light on how school systems in North America and Europe teach (or fail to teach) histories of the Holocaust.

The event is organized by Appalachian's Center for Judaic, Holocaust, and Peace Studies and named for symposium benefactors, the late Doris and Martin Rosen. The symposium is sponsored by The Conference on Jewish Material Claims Against Germany, the Martin and Doris Rosen Endowment, the Friends and Supporters of the Center for Judaic, Holocaust, and Peace Studies, Appalachian’s College of Arts and Sciences, Appalachian’s Reich College of Education, Belk Library and Information Commons, the Boone Jewish Community/Temple of the High Country, Havurah of the High Country, the Ruth and Stan Etkin Symposium Scholars’ Fund, the Leon Levine Foundation, the North Carolina Council on the Holocaust, Echoes and Reflections of Yad Vashem (in collaboration with the USC Shoah Foundation and the Anti-Defamation League), and the William Levine Family Institute for Holocaust Education, United States Holocaust Memorial Museum, Washington, DC.

For a schedule of symposium events and complete list of speakers, please visit https://holocaust.appstate.edu/teachers/2019-schedule.