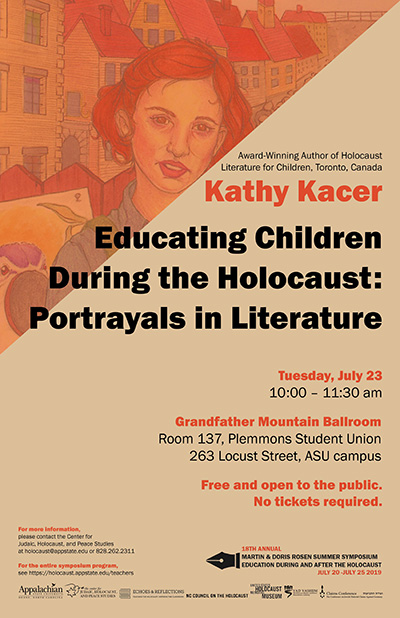 Appalachian State University’s Center for Judaic, Holocaust, and Peace Studies invites the public to a lecture by Kathy Kacer (Toronto), an award-winninng author of children's literature on the Holocaust, including  Hiding Edith and The Underground Reporters. Her talk, entitled "Educating Children During the Holocaust: Portrayals in Literature," will take place at Grandfather Mountain Ballroom, Room 137, in ASU’s Plemmons Student Union (263 Locust Street) on Tuesday, July 23. The morning program will begin at 10:00 am.

Kathy Kacer is the author of more than 20 books that focus on the Second World War and the Holocaust. A child of two Holocaust survivors, she has written unforgettable stories inspired by real events. She is a winner of numerous awards including the Jewish Book Council Awards in Canada and the U.S., as well as the Yad Vashem award for Children’s Holocaust Literature in Israel. Her books have been translated into more than twenty languages and sold in Germany, China, Italy, Thailand, England, Japan, Korea, Israel, Brazil, Belgium, and many other countries. Her novels are stories of hope, courage, and humanity in the face of overwhelming adversity. Although she has been writing for many years, Kathy only became a published author in 1999. Before that, she worked as a psychologist with troubled teens.  Kathy teaches writing at the University of Toronto, Canada (Continuing Studies). She lectures in universities and colleges on the topic of teaching sensitive material to young people. She also speaks to children and educators in schools and libraries around the world about the importance of understanding the Holocaust and keeping its memory alive.

The lecture and subsequent Q-and-A are part of the 18th Annual Martin and Doris Rosen Summer Symposium on Remembering the Holocaust that takes place from July 20 until 25, 2019, at Appalachian State University’s Plemmons Student Union and select other venues on campus and in town. This year’s symposium explores the multi-fold connections between the Holocaust and education. Attendees and participants will not only learn and ponder how the Nazi regime relied on schooling to secure support for its participatory dictatorship and racist policies, but also how persecuted Jews across German-controlled Europe enlisted education as a form of spiritual resistance and Amidah, even in the ghettos and camps. Moreover, the symposium will shed light on how school systems in North America and Europe teach (or fail to teach) histories of the Holocaust.

The event is organized by Appalachian's Center for Judaic, Holocaust, and Peace Studies and named for symposium benefactors, the late Doris and Martin Rosen. The symposium is sponsored by The Conference on Jewish Material Claims Against Germany, the Martin and Doris Rosen Endowment, the Friends and Supporters of the Center for Judaic, Holocaust and Peace Studies, Appalachian’s College of Arts and Sciences, Appalachian’s Reich College of Education, Belk Library and Information Commons, the Boone Jewish Community/Temple of the High Country, Havurah of the High Country, the Ruth and Stan Etkin Symposium Scholars’ Fund, the Leon Levine Foundation, the North Carolina Council on the Holocaust, Echoes and Reflections of Yad Vashem (in collaboration with the USC Shoah Foundation and the Anti-Defamation League), and the William Levine Family Institute for Holocaust Education, United States Holocaust Memorial Museum, Washington, DC.

The lecture and discussion are free and open to the public and no tickets are required. For a schedule of events and complete list of symposium speakers, please visit https://holocaust.appstate.edu/teachers/2019-schedule. For more information, call 001.828.262.2311 or email holocaust@appstate.edu.