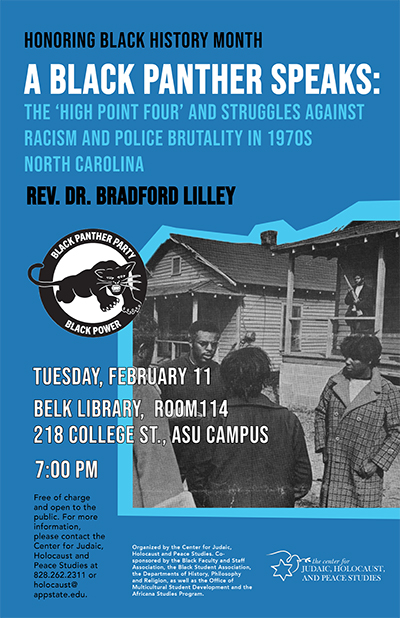 The Center for Judaic, Holocaust, and Peace Studies invites the public to a presentation by the Rev. Dr. Bradford Lilley (High Point, NC) on Tuesday, February 11, at 7:00 pm. Part of the Center's contribution to mark Black History Month, this talk is entitled "A Black Panther speaks: The 'High Point Four' and Struggles Against Racism and Police Brutality in 1970s North Carolina."It will take place at Belk Library and Information Commons, Room 114.

The Rev. Dr. Bradford Lilley joined the Winston-Salem chapter of the Black Panther Party (BPP), the BPP’s only chapter in the South, in 1970. Founded by Huey P. Newton and Bobby Seale in Oakland, California, the Black Panther Party for Self-Defense was an anti-imperialist, anti-capitalist, and anti-racist party organization Black Panther Party that began with initiatives to protect African American neighborhoods and prevent acts of police brutality. It soon added a range of “survival programs,” including the Free Breakfast for Children Program. Lilley joined the BPP as a Fayetteville State University student. While setting up an office in High Point and starting a Free Breakfast Program in the city, Lilley and three other Panthers were surrounded by some 100 police officers in early February 1971. After the death of a number of prominent Panthers at the hands of police across the U.S., they refused to surrender, which resulted in a shoot-out. In the end, the four Panthers were arrested and severely beaten by local white police officers. They became known as the “High Point Four” and continued to play an important role in the beleaguered Winston-Salem Panther chapter that remained active throughout the 1970s.

The Rev. Dr. Bradford Lilley currently serves as Senior Pastor at Shekinah Glory Church International. He has been in the pastoral ministry for thirty years. He is also a successful businessman, owning and operating Capital Property Maintenance and other companies. The Rev. Dr. Bradford Lilley remains at the forefront of community activism, serving, among others, as a mentor for at-risk youth and heading Straight Streets Prison Ministry.

The Center proudly cooperates with ASU's Black Student Association, the Black Faculty, and Staff Association, and the Office of Multicultural Student Development to bring the Rev. Dr. Lilley to campus. Additional co-sponsors include ASU’s departments of History and Philosophy and Religion as well as the Africana Studies Program.

For more information, please contact the Center for Judaic, Holocaust, and Peace Studies at holocaust@appstate.edu or call 828.262.2311. 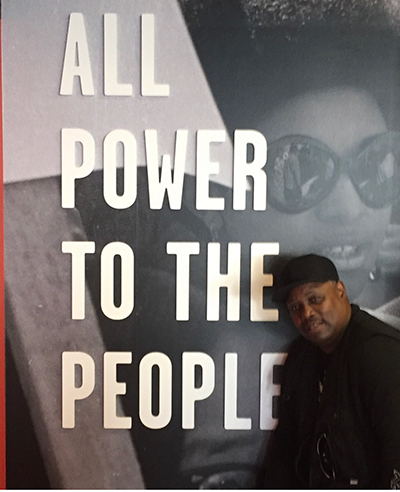