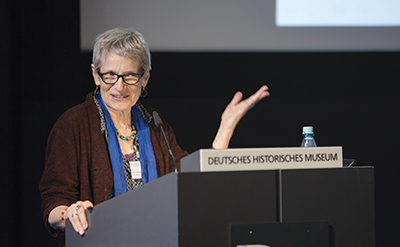 The Center for Judaic, Holocaust, and Peace Studies invites the public to an online lecture by Prof. Atina Grossmann, Professor of History in the Faculty of Humanities and Social Sciences at the Cooper Union in New York City. Her evening lecture is entitled  “Remapping Survival: Jewish Refugees and Lost Memories of Displacement, Trauma, and Rescue in the Soviet Union, Iran, and India” and will start on Monday, November 9, at 7:00 pm. Her talk integrates the largely unexamined experiences and lost memories of displacement and trauma of European Jews who managed to flee to the Far East into our understanding of the Shoah, and to remap the landscape of persecution, survival, relief and rescue during and after World War II. The event also marks and commemorates the 82nd anniversary of Kristallnacht, the nationwide pogroms in Hitler Germany that began on November 9, 1938, and marked the prewar turning point in the Nazi regime's persecution of the country's Jewish population.

Prof. Grossmann is a specialist in German-Jewish history, Holocaust Studies, and women's and gender history and the author and co-editor of many path-breaking studies that helped to reshape various academic fields. These works include Jews, Germans, and Allies: Close Encounters in Occupied Germany (2007), Wege in der Fremde: Deutsch-jüdische Begegnungsgeschichte zwischen New York, Berlin und Teheran (2012), and Reforming Sex: The German Movement for Birth Control and Abortion Reform, 1920-1950 (1995) as well as the co-edited volumes on Shelter from the Holocaust: Rethinking Jewish Survival in the Soviet Union (2017), After the Nazi Racial State: Difference and Democracy in Germany and Europe (2009), and When Biology Became Destiny: Women in Weimar and Nazi Germany (1984). Prof. Grossmann is the daughter of German-Jewish Holocaust survivors.

From 11:00 a.m. - 12:30 p.m. on the following day, Tues., Nov. 10, Prof. Grossmann's broader work will be featured in the Center's final F’20 Lunch Research Colloquium (also on ZOOM). Like all colloquia, it is based on two pre-circulated publications by our guest that all participants will read before the start of the session.

Organized by the Center for Judaic, Holocaust, and Peace Studies, the programs are co-sponsored by ASU Departments of History, Interdisciplinary Studies, and Literatures, Languages and Cultures, the German Program and the Peace, Genocide Education Club and the Temple of the High Country.

Like (almost) all Center events, these online programs are free of charge and open to the public. To attend the 11/9 ZOOM lecture, please register here.

To participate in the 11/10 colloquium and receive copies of the colloquium texts, please register here. For more information about the events, please contact the Center at 828.262.2311 or holocaust@appstate.edu.

The Center for Judaic, Holocaust, and Peace Studies Online