Center for Judaic, Holocaust, and Peace Studies Brings Noted Yad Vashem Exhibit on the "Shoah: How Was it Humanly Possible?" to Appalachian State

Center for Judaic, Holocaust, and Peace Studies Brings Noted Yad Vashem Exhibit on the "Shoah: How Was it Humanly Possible?" to Appalachian State 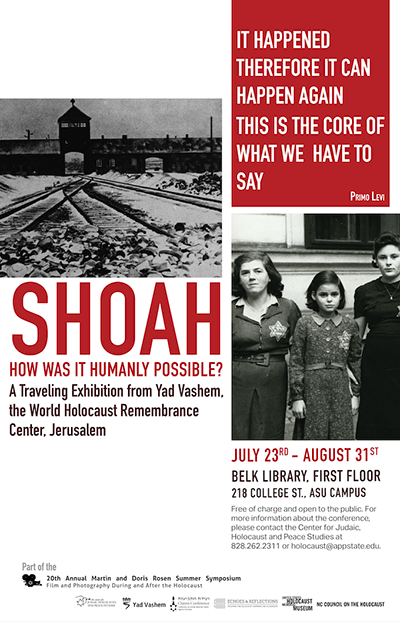 The noted traveling exhibit "Shoah: How Was it Humanly Possible?" from Yad Vashem, the World Holocaust Remembrance Center, in Jerusalem will be on display on the first floor of Belk Library and Information Commons from July 23 until August 31, 2022. The exhibition examines major historical aspects of the Holocaust, beginning with Jewish life in pre-Holocaust Europe and ending with the liberation of Nazi concentration and extermination camps across the continent and the remarkable return to life of the survivors. "The exhibition’s title asks how the Shoah was humanly possible. Implicit in the question is disbelief at the utter inhumanity of what happened," the UN's immediate past General-Secretary Ban Ki-moon stressed during the exhibit's opening in New York City. "I am afraid that one answer must be that the Holocaust was all-too-humanly possible."

The exhibit comes to Appalachian State University as a result of a cooperation between Yad Vashem, the Center for Judaic, Holocaust, and Peace Studies, and Belk Library and Information Commons. It is also part of the 20th Anniversary Rosen Summer Sumposium on Photography and Film during and after the Holocaust. In light of the renewed rise of anti-Semitism and racial hatred, white supremacy, and deadly terrorist attacks from Halle, Germany, to Pittsburgh, U.S., to Christchurch, New Zealand, the exhibit could not be more timely.  For more information, please contact the Center at 828.262.2311 or holocaust@appstate.edu.