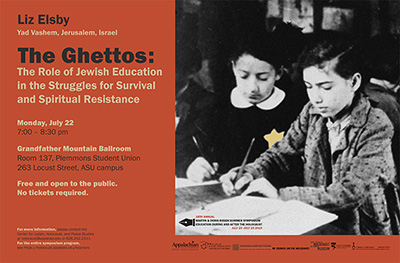 The 18th Annual Martin and Doris Rosen Summer Symposium on Remembering the Holocaust will be held July 20-25, 2019, at Appalachian State University's Plemmons Student Union in Boone, NC. This year's symposium explores the multi-fold connections between the Holocaust and education. The event is organized by Appalachian's Center for Judaic, Holocaust, and Peace Studies and named for symposium benefactors, the late Doris and Martin Rosen.

The week-long symposium will bring internationally and nationally acclaimed scholars, authors and educators to Boone. The event’s faculty and speakers include Liz Elsby from the International School for Holocaust Studies, Yad Vashem, Israel, Christina Chavarria from the William Levine Family Institute for Holocaust Education, United States Holocaust Memorial Museum, Washington, DC, Kathy Kacer, a renowned Toronto-based author of Holocaust literature for children, and Holocaust survivor Susan Warsinger. Ms. Warsinger, nee Susan Hilsenrath, who, as the daughter of a Jewish family in Bad Kreuznach, attended public and soon a private Jewish school in Nazi Germany throughout the 1930s. She escaped the Nazi henchmen by being smuggled into France, crossed the Pyrenees, and boarded a ship in Lisbon bound for the U.S. In her adult life, she spent close to three decades as school teacher in Prince George’s County Maryland school system. 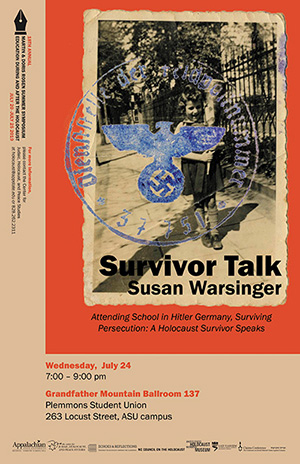 Finally, the symposium includes a screening of Roberta Grossman’s award-winning Film Who Will Write Our History, which focuses on a group of scholars, journalists and community leaders in the Warsaw Ghetto who sought to defeat Nazi lies by documenting and archiving life, suffering and death of the imprisoned Jewish population. The film combines the writings of the Oyneg Shabes archive with new interviews, rarely seen footage and dramatizations to grasp the struggles of this courageous resistance group.

The free and open-to-the public symposium provides public and private school teachers, university faculty, students and community members information and insights about the victims, perpetrators, and consequences of the Nazi genocide of European Jewry. In addition, the program widens the focus to explore Jewish religious and cultural life before the Shoah. Reflecting this year's emphasis, the symposium participants will not only learn and ponder how the Nazi regime relied on schooling to secure support for its participatory dictatorship and racist policies, but also how persecuted Jews across German-controlled Europe enlisted education as a form of spiritual resistance and Amidah, even in the ghettos and camps. Lastly, the symposium will explore how school systems in North America and Europe teach (or fail to teach) histories of the Holocaust.

Contributing to the international reach and composition of the event, secondary-school teachers from Poland, Estonia, Slovakia, Croatia, and Hungary will be among the participants and discuss the teaching of the Holocaust in their countries. As in years past, teachers from North Carolina and other U.S. states can receive continuing education units for attending the lectures, workshops, discussions, and demonstrations.

The symposium is sponsored by The Conference on Jewish Material Claims Against Germany, the Martin and Doris Rosen Endowment, the friends and supporters of the Center for Judaic, Holocaust, and Peace Studies, Appalachian's Reich College of Education, Belk Library and Information Commons, the College of Arts and Sciences, the Boone Jewish Community/Temple of the High Country, Havurah of the High Country, the Ruth and Stan Etkin Symposium Scholars' Fund, the Leon Levine Foundation, the North Carolina Council on the Holocaust, Echoes and Reflections of Yad Vashem, Israel (in collaboration with the USC Shoah Foundation and the Anti-Defamation League), and the William Levine Family Institute for Holocaust Education, United States Holocaust Memorial Museum, Washington, DC.